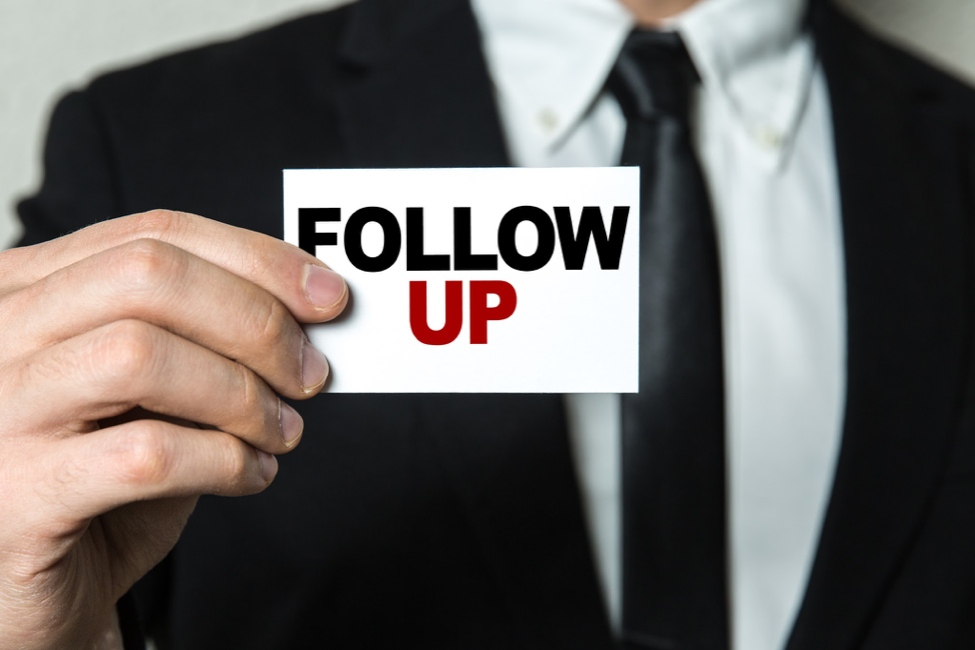 Many salespeople do not close deals because they fail to execute on a consistent and well-thought-out follow-up strategy after a prospect meeting.

A salesperson has already spent time and energy preparing for and leading a successful meeting with a prospect. So, why should you lose the deal because your follow-up is not strong?

If your sales team needs a tune-up on how to be more successful with their follow-ups after meeting with a prospect, then have them read these three keys. You should also consider one of the many ProSales Connection services to help your team improve conversion rates.

1. End the Prospect Meeting With Clear Next Steps

One simple question to ask while you have the prospect’s attention is if they could pull up the calendar on their phone to schedule the next meeting. Rarely will the prospect outright refuse to do so. But, even if the prospect eventually cancels the meeting, at least you will remain in communication and have the opportunity to re-schedule.

A salesperson should also establish action items. As you finish the meeting, you should itemize what you are going to do and what the prospect is going to do. This way, you are setting expectations for follow-up.

The key is to make sure you meet the prospect’s expectations. This could be sending more information or additional details on your solution within an established time period, e.g. two days, one week, a month.

One of the most unfortunate ways salespeople lose a deal is simply not meeting the established timeframe for follow-up. If you make a commitment during this stage of the sales process, you 100 percent must meet your own deadlines, or risk losing credibility and respect from the prospect.

2. Send a Letter of Understanding

Now that you have walked away from the meeting with next steps and agreed-on action items, you should prepare a straightforward Letter of Understanding.

The follow-up letter should be either in the form of a direct email or an attachment within an email, depending on the amount of information you are sending the prospect. Best practice is to send the letter within two days of the prospect meeting.

The importance of this letter is confirming what was agreed on during the meeting and smoothing the path to a proposal meeting.

There are several key elements that should be included in your follow-up letter to the prospect:

Many salespeople miss this critical step in a professional follow-up strategy with their prospects.

That’s why taking the time to write a Letter of Understanding is a very effective follow-up step toward the ultimate goal of converting the prospect into a customer.

3. Slow the Prospect Down from Jumping Ahead

During the follow-up discussion, a prospect might simply ask to see a proposal. That sounds like a good thing, but it’s jumping too far ahead in the process because you are not close to a done-deal.

The prospect likely is not sure what to ask for next, or they did not read the Letter of Understanding to confirm what was agreed on during the first meeting.

Once the prospect has a good understanding of what is contained in the letter, the prospect confirms interest after reviewing the figures, and you identify the decision-makers who need to be involved in the process, then you can transition to a proposal meeting to hammer out the details.

But, if the prospect does not have a clear understanding of what has been agreed on, then jumping to a proposal meeting could cause you to lose the deal. For example, if you walk into the meeting offering your solution for X dollars and the prospect is thinking Y dollars, then you are in trouble.

Establishing what was agreed on during the first prospecting meeting, doing your follow-up to confirm details, and building to a proposal meeting are the keys to a successful follow-up strategy after a prospect meeting.

Make sure your sales team is following this plan for successful prospecting. You can also learn how ProSales Connection sets up clients with qualified prospects using our Sales Appointment Setting program.

Mike Faherty is the Founder & CEO of ProSales Connection, a sales and marketing firm based in Houston, Texas. ProSales Connection specializes in helping B2B and technology companies grow through sales appointment setting and outsourced inside sales programs.